The Worst Witch was released in 1986 on Central Independent Television and HBO. It is based on the children's book by Jill Murphy. The film follows the plot of the 1974 book, portraying the incidents of when Mildred turns herself invisible and transforms Ethel into a pig, Miss Cackle's notorious twin sister Agatha plotting to take over the Academy, and the Grand Wizard viewing the Halloween Broomstick formation (sabotaged by Ethel's faulty broom which she lent to Mildred).

The film was shot at St. Michael's College in Tenbury Wells. Its opening and closing song "Growing Up Isn't Easy" was sung by Bonnie Langford. It was composed by Charles Strouse with lyrics by Don Black. They also wrote "Anything Can Happen on Halloween". Denis King composed its score and wrote the song "My Little School". The movie was Directed by Robert Young, and the Producer was Colin Shindle.

'Ethel Hallow: You sure you know how to play Terror Tag?


Mildred Hubble: Everyone knows how to play Terror Tag.
Ethel Hallow: You're not everyone.

Grand Wizard: [playing his tambourine] Has anybody seen my tambourine?

Miss Hardbroom: No textbooks Maud! Either you know it or you don't. You can't fake a potion.

Agatha: Donna's arrived. She'll be a hundred and thirty six next month and she still acts like a teenager.

Miss Hardbroom: I've been quite hard on you Mildred. But I wouldn't have troubled if I hadn't have always thought you had potential.

Grand Wizard: You see, you're not the worst witch anymore.

Miss Cackle: So Mildred, what can I do for you?
Mildred Hubble: Miss Hardbroom sent me.
Miss Cackle: Oh dear. What happened this time?

Grand Wizard: Once in a purple moon, there is a special young witch who shines above the rest. Often she goes unnoticed, because she is always out of step. I have seen this girl trying to fly. Oh yes, I have. I've seen her at play and how her friends treated her. A true witch isn't always one who comes out on top of the tests. A true witch has witchcraft in her at all times, and this is what you have, Mildred Hubble. And so, Ms. Cackle, I ask you to make the rest of the day a half-holiday. 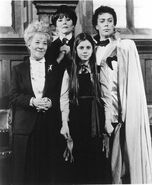 -The school colours are changed from black and grey to black and orange to reflect the Halloween theme.

-Jill Murphy was disappointed with the film: “It was one of those things that starts up a great hope and bits go wrong. The film was terribly disappointing because it had an appalling script and they made various mess-ups, like with the costumes. When the girls saw the costumes they practically cried because the hats looked ridiculous. Diana Rigg and Tim Curry did their absolute best with weak special effects but they didn’t have very good material.”[1] Murphy was more impressed with with the 1998 TV Series: "I do think that it was basically a good series and people still remember it very fondly"[2]

http://www.angelfire.com/tx3/80schild/worstwitch.html -Script of The Worst Witch

Retrieved from "https://theworstwitch.fandom.com/wiki/The_Worst_Witch_(1986_Film)?oldid=19553"
Community content is available under CC-BY-SA unless otherwise noted.