The Unfairground is episode 12 of the third season of The Worst Witch. It was Preceded by The Lost Chord, and followed by The Uninvited. It is the first part of a two-part episode, the second part is The Uninvited.

The third years are writing their last exam and Mildred is drawing a picture of Miss Hardbroom (an unflattering one) while she waits for the exam to end. When it does, they all sing, and dance and throw magical confetti. Miss Drill thinks it's fun and they magic her some daisies. Miss Hardbroom shows up and tells them all off. Mildred and co. go back to DOBS where Fenella and Griselda are playing chess. They complain that it's not fair to keep them at school when all their exams are done. Fenny and Gris tell them that there's a fair in town, and they'll make sure no one notices if they skip off.

They get dressed in normal clothes and sneak down to the local village to go to the fair, while Fenella and Griselda cover for them during registration. Unfortunately, they are caught out by Miss Hardbroom, who proceeds to punish Fenella and Griselda by making them scrub the corridors until they tell her where the girls have gone. Miss Crotchet is reading tarot cards and sees revolt and revolution in the future.

Miss Cackle hides inside the girls' DOBS den under the library and waits for them to return. Mildred talks about winning her fish, and asks Jadu what she's going to call her bear. Jadu says Cackle because she's big and round. After hearing the girls being disrespectful to the Academy and herself, Miss Cackle snaps and demands an immediate crackdown on discipline and standards, much to Miss Hardbroom's delight. She issues a 'zero tollerance' order, not allowing the pupils any social time and confining them to the school building.

Mildred and her friends decide to make a stand against the rules, and they have some unexpected support from Drusilla and Miss Drill. Miss Drill helps the third years hold a meeting to discuss it. Jadu calls everyone to arms, and says that they need to have a voice. Even Drusilla gets involved and says that she wants more chips at lunch, and she doesn't want to be forced outside when it's cold.

Jadu calls a meeting in the dungeon that night. At the meeting, Jadu says that they should start a paper to make the other students think and realize what's going on. They all agree, and They decide to call their paper The Unfairground.

They write a newspaper containing their ideas, with Mildred's drawing on the cover, and issue it around the school. They manage to gather the support of every girl in the school, and hold a secret meeting in the Great Hall followed by a magical rollercoaster ride. No one will be able to hear, because there'll be a ring of silence around it. Fenella and Griselda (still being made to clean everything in the school) are mixing a potion in with the water they're using to create the ring. Ethel spies on them and finds out what’s going on, and tells Miss Hardbroom.

Meanwhile, Jadu and Mildred lead the rally in the great hall. Everyone votes that they don't want to wear their uniforms outside of school, that they want the secret societies reinstated, and that they want more chips. Then, as promised, they run an optical illusion spell that makes it like being on a roller coaster.

Meanwhile, Ethel and the staff are outside the door. They don't hear anything, but Ethel tells them she's sure they're in there. Miss Hardbroom tries to go in the door, but appears outside it again. Miss Hardbroom and Cackle try together but the same thing happens. It's a revolving door spell. They magic themselves in, and end up on the roller coaster with the girls.

Later, Mildred and her friends are summoned to Miss Cackle's office, having been discovered as the source of the derogatory newspaper. As punishment for leading the rebellion, Miss Cackle expels Mildred and Jadu from the Academy. 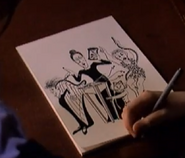 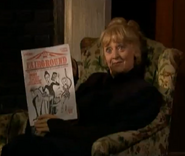 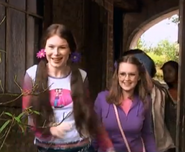 HB is warned by Crotchet not to walk under a ladder: HB: "Oh yes and I'm born under Capricorn so my knees will give way, in the year of the pig, so I won't worry as long as I carry a blue crystal to reinforce my aura! You're the only witch I know who believes all that poppycock!" (Kate Duchene is actually a Capricorn!)

Retrieved from "https://theworstwitch.fandom.com/wiki/The_Unfairground?oldid=18759"
Community content is available under CC-BY-SA unless otherwise noted.