The Inspector Calls is episode 5 of the second season of The Worst Witch. It was preceded by Crumpets for Tea, and followed by Animal Magic.

OFWITCH, the Witch School Inspectorate, decides to launch a surprise inspection on all the schools which they consider to be at risk of slipping through the cracks.

Panic spreads amongst the teachers of Cackle's Academy; Miss Cackle receives a letter from OFWITCH, stating that they will be coming to inspect the school the following day. The staff dismally looks toward having their GAS (guild approved status) cut off and having to shut down.

The particular individual appointed to inspect Cackle's Academy is none other than Mistress Hecketty Broomhead, a tyrant of the first order and, as it happens, Miss Hardbroom's personal tutor from witch training college. When Miss Hardbroom is told of this, she actually collapses into a chair with a look of absolute fear and implores them to be very, very afraid.

Meanwhile, Clarice has gone to Fenny and Gris for advice about Sybil. It seems that since Mildred saved her, Sybil's been leaching onto her and Clarice wants the older girls to convince her to lay off a little (seeing as Mildred, Enid and Maud think it's really cringy).

An emergency plan of action is drawn up and the staff of Cackle's decides to make every effort to cover up all the things which are wrong with the school. Miss Cackle enlists Fenny and Gris to help her dispose of records of parent complaints and disasters.

Miss Hardbroom stuffs Mildred's bats in a box and explains that in order to prevent any unforeseen disasters, Mildred is banished to her room for the duration of the inspection, and her bats are confiscated. Disgruntled by this, Mildred follows Miss Hardbroom to find out where her bats have gone, and finds out from Fenny and Gris that they're locked in a trunk in the storage closet.

Broomhead arrives the next day, angry that the directions she got from Miss Cackle were so muddled. After refusing tea she begins her inspection and runs into Miss Hardbroom. After saying sufficiently nasty and insulting things, with poor Miss Hardbroom unable to manage a retort, she sets off on her own.

Meanwhile, Gris and Fenny try to talk Sybil into rescuing Mildred's bats from the closet by way of impressing her. Sybil says she'll think about it and goes to class, where Broomhead introduces herself to Miss Bat. "I don't like bats," she informs the teacher. She then insults everything else about the class and makes her way to Miss Cackle's office.

Sybil is distraught, since she messed up chanting in front of the inspector, and decides it couldn't hurt anything to go after Millie's bats. She takes Fenny with her and flies into the closet.

"There is one name which keeps popping up," Broomhead informs Miss Cackle and Miss Hardbroom (who bolts to Mildred's room). Dragging Mildred behind her, Miss Hardbroom makes to put her in the storage closet, but opens the door to see Sybil and Fenny staring in puzzlement at the empty chest, which contains a forbidden almanac of spells.

Forgetting about being stealthy, Miss Hardbroom exclaims "Sybil Hallow, give me that volume at once!" Before the girl can comply, Broomhead appears out of thin air, delighted to have caught up with Mildred at last.

Miss Cackle arrives and admits to hiding some things. The inspector informs her that the school is going to be shut down, and Sybil comes into her own and casts a spell on Broomhead, turning her back into a child. Miss Cackle recognises the girl as Wilhelmina Wormwood, a student she went to school with who tried to freeze everyone in a block of ice. Using this as blackmail, they receive a marvellous review and a very polite goodbye- Once again, the school is saved from closure.

Amelia: “Apparently OFWITCH has received reports of (pauses) ... goings on”
Davina: “What sort of goings on?”
Constance: “Mysterious whirlwinds gusting through dormitories, pupils being turned into frogs, (voice goes up an octave) senior members of staff being attacked by flying buckets ...”

"Inspectors? What are they but failed old witches﻿ themselves?"

HB: "She is the most relentless witch I have ever come across!"
Miss Bat: "That's nice!"

Miss Cackle: (sorting papers) “parent’s complaints… broomstick flying accidents… improper use of spells… get rid of those; we don’t want OFWITCH finding them!”

Mistress Broomhead (to Miss Bat) “I don’t like bats!”

Miss Cackle: “You’re not Mistress Broomhead, you’re Wilhelmina Wormwood, you terrorized the other students, turned teachers into snakes and lizards, and when you were caught you tried to freeze the whole school into ice until you were expelled. All because you were bitten by a bat when you were young-that was your excuse anyway.” 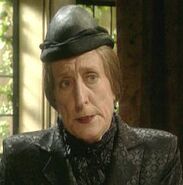 Retrieved from "https://theworstwitch.fandom.com/wiki/The_Inspector_Calls?oldid=20390"
Community content is available under CC-BY-SA unless otherwise noted.