The strains of the school song can be heard echoing through the vaulted halls of the converted Gothic castle, which is Cackle's Academy. The young witches fly in on their broomsticks across the dark wooded slopes and over the school gates for the start of another year.

Mildred Hubble is on her way to Cackles Academy for the start of her first year, only to get lost on the way there. She comes across Ethel Hallow, who takes an imediate dislike to her and leaves her behind at once.

Miss Hardbroom is taking a register of the first years as they arrive. She is very pleased to see Ethel Hallow come flying in and make a perfect landing, but has to inform Miss Cackle that Mildred Hubble hasn't yet arrived. Miss Cackle wonders if Walker's Gate can be left open a little longer, but Miss Hardbroom is a stickler for discipline and insists that it be closed on time. Mildred arrives breathless, at the other side of the gate as it shuts. Deciding to give her broomstick a try, she flies over the wall. 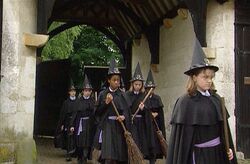 Inside the courtyard, Miss Cackle is making a speech of welcome to the girls. At that moment Mildred, in full flight, rises up over the gates, swoops along the courtyard and crashes straight into the school dustbins, breaking her broomstick in half. Everyone has a laugh at her expense, but Maud Moonshine comes to her rescue.

The next few days are full of madness and mystery as Mildred comes to terms with all the rules and age-old traditions of Cackle's Academy. The first two weeks are devoted to broomstick flying, unfortunately for Mildred, who is afraid of heights. She is warned that, though she may be a scholarship girl, if she doesn't pass her Broomstick Aptitude Test, Miss Cackle will be forced to ask her to leave.

Fortunatly for Mildred, Mr. Blossom has come up with a virtual reality device for broomstick flying, but Miss Hardbroom imediatly orders it to be locked away. Not one to give up, Mildred and her new friends (Maud, Ruby, and Jadu) sneak downstairs in the middle of the night and try to operate the device.

Disaster ensues and Mildred (who is terrified of heights) glumly awaits the test, certain that she will fail. It's then that she gets the brilliant idea to communicate with Ruby by radio and fly with her eyes closed. However, things go awry and Miss Hardbroom discovers their plan and subsiquently foils it.

But Mildred manages to save herself at the last second, and with a little bit of magic from somewhere unexpected, Mildred stays the course and passes the test. Much to the distaste of Miss Hardbroom and Ethel, Miss Cackle gives her the "benefit of the doubt", and allows her to stay on at the Academy.

Miss Hardbroom: "I don't want to know your name girl, I want to know what that thing is in your ear!" ZAP! Ruby screaming, then HB goes back to reading the names off the list.

Miss Hardbroom: "Any questions girls? (handful of girls raise their hand) No, good."

Miss Hardbroom: “Plugged into the beat again, are we, Ruby Cherrytree?” ZAP!

Everyone yelling: “BANANA BROOM, BANANA BROOM!”
Miss Bat: "You stick to your banana; it has a lot of character."

Here is a list of spells featured in the episode, along with who performed them, who they were performed on (when applicable) and, if given, the incantation used.

Retrieved from "https://theworstwitch.fandom.com/wiki/The_Battle_of_the_Broomsticks?oldid=18706"
Community content is available under CC-BY-SA unless otherwise noted.