Davina Bat (Gwendolyn 'Gwen' Bat in the 2017 series) is the loopy and eccentric chanting teacher at Cackle's Academy. She has a habit of locking herself in the staffroom cupboard when she is angry or upset. After Mildred's second year, Miss Bat leaves to go to Mongolia, and a new chanting teacher, Miss Lavinia Crotchet, takes her place.

Miss Bat is seen playing the organ at assembly.

In her childhood, Miss Bat attended a witches' school (unknown), where the students keep hedgehogs as pets.[1]

When she was assigned as form teacher, she turned her class into birds and migrated with them. She was not given a similar oportunity until Mildred's second year at the Academy. When Miss Gimlett, the Second Year class tutor left at the start of the new term, Miss Bat fought with Miss Drill over which one of them should replace her. Miss Cackle eventually decided to let Bat and Drill share the position, but later put Miss Bat in charge of the First Year for half of the term.[2]

After Mildred's second year, Miss Bat leaves to go to Mongolia, and a new chanting teacher, Miss Lavinia Crotchet, takes her place. The reason given in the series for the change of chanting teachers is that Miss Bat left to go to Mongolia to enjoy Mongolian music.[3] Miss Bat likes Mongolian music and even went there for a holiday, bringing back a bottle of inedible yak's milk.[4] In the books, Miss Bat is still at the Academy in Mildred's third and fourth year.

In Pond Life, it is revealed that Miss Bat and Algernon Rowan-Webb were in love many years ago, and are reunited thanks to Mildred.

In The Best Teacher, Miss Bat wakes up claiming something has taken her sock, and Miss Cackle and Miss Hardbroom decide that she has 'lost her marbles' and that she needs some time off teaching. Algernon comforts Miss Bat, and when it is suggested that she may have to leave permanently, Algernon says that he may have to leave with her, however Miss Bats reclaims her teaching post when something 'tinkers with her toenails', deciding it safer to be teaching than in bed.

In The Extraordinary Esper Vespertilio, Miss Bat tells the girls that Madam Vespertilio, a very successful chantsmith, has been persuaded to come out of retirement for a single performance at Cackle's. The girls are disinterested so Miss Bat cancels it, but Mildred uses one of Vespertilio's magical records to show everyone how amazing chanting can be. It is then revealed that Miss Bat herself is the famous chantsmith and that Esper Vespertilio is her stage name (Vespertilio is Latin for bat). The Great Wizard himself is a huge fan of hers (he has all of her albums) and finds her inspirational. He eventually agrees to let his grandson Oliver take chanting classes with Miss Bat.

In Finding Joy, Algernon proposes to Miss Bat, but because she ate a cake that Mabel Tapioca put a spell on, she says 'No' instead of 'Yes', causing Algernon to run away to the pond and turn himself back into a frog. However Miss Bat finds him, and explains that it was a misunderstanding. She then proposes to him, and he says yes. They get married at the end of that year, and are last seen planning their honeymoon.

In the books, Miss Bat is described as being tiny and old with a conductor's baton behind her ear and having grey frizzy hair worn in a plait twisted round the back of her head, and having three chins as a result of her habit of pressing her jawbone onto her chest. In the TV series, she keeps the baton behind her ear but her hair is mousy-brown rather than grey and the plait twisted round her head is changed to a bun. In both the books and TV series, she has small round glasses.

in the 2017 TV Series, Miss Bat is said to be very, very old; Nobody knows quite how old - or dares to ask - but witches are extremely long lived.[5]

Miss Bat is slightly loopy and eccentric. She regards creativity and individuality as necessities. She also has the habit of locking herself in the staff room cupboard when offended (mostly after encounters with Miss Hardbroom). Sometimes Miss Bat even appears to spend the whole summer holidays in that cupboard, only to emerge from it when the new term starts.

She also has a habit of eating bizarre food, including flowers, fungus, sour milk and cat food. Miss Bat is also not the most reliable person to have in a crisis, as proved in the episode Alarms and Diversions when the emergency alarm reduces her to hysterics. In the episode Old Hats and New Brooms, Miss Bat surprises everyone by returning from Inner Mongolia (she usually spends the summer holiday in the staff room cupboard).

She is very enthusiastic about composing new chants for the school choir, and fancies Mongolian undertone chanting, sour yak milk, fresh fruit salad and unorthodox methods of teaching. She is also very fond of Eye Of Toad, but is displeased by Enid Nightshade's inability to sing in key.

Miss Bat plays the school organ - loudly - and also all sorts of instruments which aren't actually instruments - Miss Hardbroom tends to call her musical attempts an awful cacophony. She's also the mixer of the school's dreaded medicinal potions, though her medicine doesn't seem very effective, and her cooking isn't very popular either.

In the 2017 TV Series, Miss Bat is the oldest member of staff and is known for falling asleep during class, however she is also shown to be a kind and helpful teacher. In The Best Teacher, everyone assumes Miss Bat has lost her marbles when she talks about something stealing her socks. Miss Bat has been teaching at the Academy for so long that she taught Maud's mother,[6], and apparently even knew Ada and Agatha Cackle when they were young.

Miss Bat hates Miss Hardbroom (Miss Hardbroom sees Miss Bat as incompetent and irresponsible), but Miss Drill is like a best friend to Miss Bat. When Miss Gimlett, the Second Year class tutor left at the start of the new term, Miss Bat fought with Miss Drill over which one of them should replace her. Miss Cackle eventually decided to let Bat and Drill share the position, but later put Miss Bat in charge of the First Year for half of the term.

Being a senior member of staff as she likes to point out, Miss Bat is convinced that she deserves more respect than Miss Hardbroom or sometimes even Miss Cackle or Miss Drill are willing to grant her.

Miss Hardbroom: Mildred Hubble! How dare you enter the staffroom without knocking. There is no excuse.

Miss Bat: THE DOOR WAS OPEN!﻿

Miss Bat with her Cheerleaders 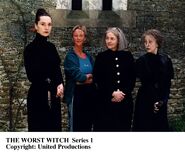 Miss Bat with her fellow teachers at Cackle's 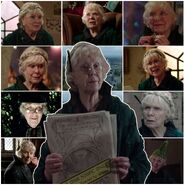