This is a List of students at Cackle's Academy.

In The Worst Witch To The Rescue, Mavis, a student two years below Mildred, appears. She brings Mildred a message from Miss Hardbroom, and is glad to be of assistance to Mildred, whose adventures were legendary throughout the school.

Dulcie appears in First Prize for the Worst Witch; she is three years below Mildred and is into horses, she has pony called Merlin, who ends up living at Cackle's Academy thanks to Mildred.

Harriet Goodcharm is mentioned to have left during the second year, taking Fenella Feverfew's Place from the book, Though Dawn Raven is the student missing in the second season. Throughout the series, there are sometimes other names: Gemma and Jenny appeared in A Bolt From The Blue, written on the blackboard with the results of the spell competition. Daphne is Mentioned in A Mean Halloween, when they go to the Great Hall to practice the Halloween play.

Names for Sybil's Year can be seen in The Inspector Calls, when Miss Bat hands out the name stickers.

At the beginning of The Heat is On, when HB inspects the lockers, and later when the girls are cleaning, each locker has a label with the pupil's name, but only a couple of labels can be read.

Phillipa Henbane is mentioned in The Millennium Bug, when students are talking about Miss Hardbroom's Disapperance. Gemma and Jenny Raspberry are twins, they can be seen laughing at Mildred during the Broomstick Aptitude Test in The Battle of the Broomsticks.

The Honour board in Old Hats and New Brooms 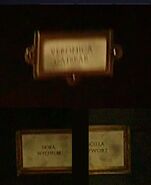 Name Labels on Lockers in The Heat is On

Miss Hardbroom at the lockers in The Heat is On

Blackboard showing Jemma and Jenny's names in A Bolt from the Blue. 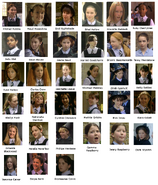 List with Pictures[1]
Add a photo to this gallery

Students from The New Worst Witch, these names were seen on the star chart throughout the series.

The class list for Mildred's class is seen in Bat Girl. There is one more name at the top of the list that can't be read, for a total of 16 in the class. The names Ember Toadflax, Harriet Cawclaw, and Bella Blackwood are seen listed on the board at sports day. They are in Mildred's year, as they are competing alongside Maud in the 2nd year's sports day. Jean Wand is called for the broomstick hurdles on sports day. Lucinda Eaglewing is the girl who had a potion allergy in Selection Day. Lucinda, Bella and Charlotte are named in the scripts, the only non-credited students to be named- all the others are listed collectively as 'Girls'.[2] The names Taya Stone and Willow Comfrey are seen on failed test papers in Selection Day

The year below Mildred's includes:

One Year Above Mildred includes:

Hazel and Peggy won the Spelling Bee the year before Mildred started.

In The Game, the following names can be seen on Mildred's pinboard, when she tracking the spread of the game through the school: Harriet, Margot, Lucy, Nora, Hilda, Winnie, Vanessa, Bessie, Lavender, Isobel, Bertha, Poppy, Violet, Demelza, Amber and 1 unknown girl who's name can't be read. Mildred gives Harriet's full name as Harriet Henbane. None of these girls seem to be in Mildred's class, so they are presumably in other years above or below her.

The board at sports day

Pinboard from The Game 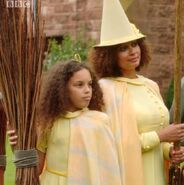 The Following students appear in the Magical Mystery game on the CBBC website:

Retrieved from "https://theworstwitch.fandom.com/wiki/List_of_students_at_Cackle%27s_Academy?oldid=20101"
Community content is available under CC-BY-SA unless otherwise noted.