Jessica Fox (born 19 May 1983) is an English actress. Since 6 July 2005 she has played the role of Nancy Hayton in British soap Hollyoaks. She played Enid Nightshade in three series of The Worst Witch and in the spinoff Weirdsister College.

Her career started at the age of eight when she starred in a Persil commercial filmed in Indiana Jones style, in Spain. This was followed by featured West End roles in the Sound of Music, Les Miserables and Oliver. Fox trained at the Redroofs Theatre School in Maidenhead.

She then joined the cast of The Muppet Christmas Carol. Shortly afterwards her career in television was furthered with roles in The Angel of Nitshill Road, May and June, Trial and Retribution, The Bill and the leading role of Anthea in the 1997 BBC adaptation of The Phoenix and the Carpet.

She then turned to comedy playing the "naughty but nice" Enid Nightshade in three series of The Worst Witch and the slightly naughtier Enid in the spinoff Weirdsister College. Co-starring with Sarah Lancashire, she then appeared in the role of Rusty Dickinson in Back Home.

Fox then moved into soaps, playing Belle Wise in Crossroads, and made a guest appearance in children's show Powers. Jessica joined Hollyoaks in 2005, as Nancy Osborne.

Fox has an older sister, Hannah, who is a drama teacher at Thomas Bennett Community College in West Sussex. Her dad supports Manchester City.

Enid in The Worst Witch 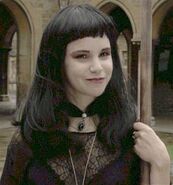 Retrieved from "https://theworstwitch.fandom.com/wiki/Jessica_Fox?oldid=18163"
Community content is available under CC-BY-SA unless otherwise noted.