The Hallow Family are a prominent witching family that have attended Miss Cackle's Academy for Witches for generations, and are involved in the Magic Council.

In First Prize for the Worst Witch, it was revealed that every Hallow who attended the Academy in the previous two centuries had been Head Girl; there had been thirty-five Hallow Head Girls over the centuries.

Hallow family portraits adorned the walls of the Great Hall of the Academy, including Ethel's grandaunt (mentioned in Art Wars), and subsequently there was unacknowledged yet definite pressure on the likes of Ethel and Sybil to follow in their ancestresses' footsteps and do well. Though this is not the sole reason, it is still highly likely to be one of the major factors for Ethel's singling out Mildred for bullying - a subconscious way of venting her stress from the pressure of always having to be at the top where grades were concerned.

In the 2017 series, during All Hallow's Eve, Ethel met her ancestresses when they came to life from her Family Tree. Apparently, Mrs. Hallow once told her daughters a real story about how a Hallow witch saved her coven by reigniting the coven's Founding Stone, but Ethel had always dismissed it as a mere fairy tale. Nevertheless, she went along with Mildred, Maud, and Enid in search of answers from her Hallow ancestresses, only to end up being increasingly dismayed by the revelations of what kind of witches the Hallows truly were - cheaters who delighted in cursing their neighbours' goats, or transforming other coven members into toads when they outgrew their boots, etc. Ultimately, it was revealed that the Hallow ancestress who supposedly reignited the Stone was not the one who did it, but she just took credit for it! It was actually Mirabelle Hubble, Mildred's ancestress, who reignited the Stone. 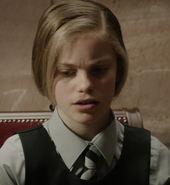 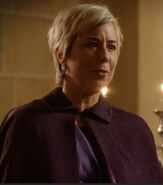