The Worst Witch Wiki
Register
Don't have an account?
Sign In
in: Characters, Witches, Antagonists,
and 3 more

In Mildred's first year, on Halloween, Mildred spots her and her coven plotting to turn the whole academy into frogs[1].

In a flash of fear, Mildred turns both Agatha and her coven into snails and puts them in the boxes meant for the frog-pupils and frog-teachers and takes them up to the academy to show to Miss Cackle; Miss Cackle and Miss Hardbroom then deal with the witches.

Agatha reappears in Mildred's third year[2], where she sneaked into the school disguised as a new teacher, Miss Granite, with a high-pitched, squeaky voice, a huge cloud of orange curls, and an extremely bizarre personality. She is later found out by Mildred when Mildred comes to collect Tabby from her. Luckily, Mildred and her friends turn Agatha and her coven into snails themselves. While disguised as Miss Granite, Agatha is able to appear and disappear HB-style.

In Mildred's first year, on Halloween, Mildred spots her and her coven plotting to turn the whole academy into frogs[3].

One of Agatha's first instructions was to "Get Hardbroom" noting that she was the one they needed to get first because of her power. Mildred ends up shrinking the witches and handing them to Miss Cackle.

At the end of Mildred's First year, Agatha Sneaked into the Academy disguised as Miss Cackle[4], Mildred and company, however, realise that it is not Miss Cackle, but Agatha back to cause more trouble.

The girls track down the real Miss Cackle to the store cupboard in which Mildred and Enid were once trapped. Unfortunately, they are discovered by Agatha's two wicked cronies, Millicent Coldstone and Betty Bindweed. Mildred puffifies them and saves the day, for which she earns a raise in her final grade from C- to A+.

In Henrietta Hubble's first year, Belladonna's granny Betty Bindweed and Miss Cackle's twin, Agatha try to take over the school yet again by using the End of Term prize, the very powerful Golden Broomstick. The special broomstick is won and Belladonna takes it to help Miss Cackle's sister take over the school, but their plan is foiled by Hettie.[5]

On Selection Day, Agatha turns up, and Miss Cackle gives her permission to speak to Miss Hardbroom for an internet article. Mildred then witnesses Agatha putting a spell on the celebratory meal. When Mildred tries to warn the staff, she is magicked outside the school grounds. With the help of a magic frog she levitates herself back into the school, where she manages to prevent Miss Cackle eating the soup, announcing Agatha put a spell on it.

Agatha invokes a section of the Witches Code and she and Miss Cackle have a magical duel. Agatha wins and turns Miss Cackle into a snail. After Miss Hardbroom pointedly drops hints (in Midred's direction) about how students or staff are bound by the witch's code and can do nothing about Agatha now being in charge, Mildred prompts the cat to knock the soup with Agatha's spell - which was a total obedience spell - over Agatha and then orders her to turn Miss Cackle back to normal. Agatha's powers are then confiscated.

In The Great Wizard's Visit, Agatha masquerades as Miss Cackle again, while, the real Miss Cackle is in an enchanted sleep on the bed. However, when Mildred's potion display gets out of control and The Great Wizard is splashed with potion, he announces that he will be removing Miss Cackle as headmistress, and the school will go to the next Cackle in line - Agatha. However Miss Hardbroom is able to talk him out of it with a speech in support of Miss Cackle.

Agatha, still posing as Miss Cackle, then announces that the first years will perform a broomstick display, led by Mildred Hubble, and the teachers are left in shock. However, Mildred realises that Miss Cackle is really Agatha and tells Maud and Enid. Maud pretends to sick so she can skip the broomstick display. As the display gets underway, Maud finds Miss Cackle in an enchanted sleep and reverses the spell. Outside, Mildred's broomstick goes out of control, but Miss Cackle arrives in time to save her, revealing that she is the real headmistress as Agatha can't do magic. It is revealed that Agatha used a mirror to bounce Ada's own spell back at her, and that Ethel put a spell on Mildred's broom, but everything is forgiven, and Agatha is banished.

In The Mists of Time, Mildred and Ethel accidentally go back in time, and meet Ada and Agatha as schoolgirls, and their mother Alma as headmistress. Agatha and Amelia try to take their mother's power and run the Academy themselves, however Mildred and the Miss Cackle from the present talk them out of it. It turns out Agatha is the eldest (by 13 minutes), not Ada as they believed, meaning that Agatha was supposed to inherit the Academy. Their mother told Ada that she lied about which twin was older as she wanted Ada to have the school, because Agatha would never run it according to the proper values.

Agatha ends up getting expelled and sent to Wormwood's Academy (where wicked witches are sent) while Ada becomes head girl. They apparently attempted to run the school together, but it was a disaster.

In Out of Bounds, Agatha escapes her banishment at Darkwood Cottage, and pretends to be Miss Cackle again. She claims Agatha has taken her powers and tries to get Mildred to give her hers, but Mildred realises that it's actually Agatha. Agatha and Miss Gullet then turn up at the Academy, and claim that Agatha is Miss Cackle. Esmerelda invites them in, and is tricked into giving Agatha her power.

In The Worst Headmistress, Agatha and Miss Gullet terrorise the school; they turn Miss Drill back from a snail, but turn Miss Bat and Algernon into frogs and Esmerelda into a trophy, while Ethel is made head girl. Agatha also casts enchantments so that no-one can use magic without her knowing. Agatha also turns The Great Wizard into a balloon, and traps Miss Cackle and Miss Hardbroom in a painting.

The students stand up to Agatha, saying that if Agatha is going to be Headmistress, they will all quit so she doesn't have anything to be Headmistress of, and everyone agrees. Agatha decides that if she can't have the school, then no one will, and casts a spell to destroy the castle. When Agatha tries to destroy the school, All the students chant together to stop her spell, and this also changes Esmerelda Hallow, the teachers, and the grand wizard back into themselves, and Agatha and Miss Gullet end up trapped in a painting by Miss Cackle.

Agatha is Miss Cackle's Identical twin, meaning that they look almost exactly the same, short and plump with grey hair and glasses. To tell Agatha and Miss Cackle apart, Agatha wears large, round glasses that greatly magnify her eyes.

Agatha is bitterly jealous of Amelia's position as Headmistress of Cackle's Academy, for she firmly believed that Amelia turned their "Granny Cackle" against her, and "cheated her out of her inheritance". Hence, Agatha and her coven of equally rebellious witches (Betty Bindweed and Millicent Coldstone) plotted to overthrow Amelia and take over the Academy numerous times, though they always end up being foiled by Mildred, and later by Henrietta.

In this series, it was revealed that Agatha and Ada had attended Cackle's Academy in their youth, and initially shared an intimate familial relationship as sisters. In fact, they once plotted to take their mother's power and run the Academy together, but Ada ultimately could not bring herself to go through with it, and Agatha ended up being expelled and sent to Wormwood's Academy (where wicked witches were sent). Ada subsequently became Head Girl, and later inherited the school from their mother. As adults, she and Agatha once tried to run the school together, but it was a disaster, and the twins eventually became sworn enemies.

However, it must still be noted that though Agatha had no qualms about using magic to harm Ada, the "harm" she inflicted was never truly fatal, which seems to imply that she had still retained a tiny amount of familial affection for her sister, though it always paled in comparison to her desire to possess the Academy. During an official magical duel between the twins, Ada also stated that she really did not want to hurt her sister, and much later on, when Agatha and Miss Gullet were defeated by the combined magic of all the students, Ada's response to her sister's pleas for mercy was an apology, for "her girls came first". 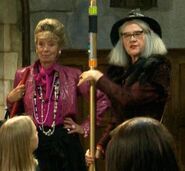 Agatha Cackle and Betty Bindweed in The New Worst Witch

Agatha and Delilah in the Telemovie

German: Agatha- Agathe instead of Agatha